We all know that we share something with the people we are related to. This is because we inherit DNA from our parents, who inherited their DNA from their parents. Our DNA is packaged into 23 different chromosomes. We have two copies of each of these chromosomes, one set that we get from our mother and the other set we get from our father. That gives us a total of 46 chromosomes arranged into 23 chromosome pairs. When we inherit those chromosomes from our parents, we also inherit the DNA sequence variants, which is why people tend to look more like their parents and siblings than other people. 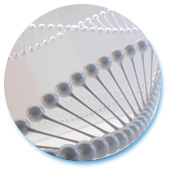 There are different ways that traits and diseases can be passed through a family. Some traits and genetic diseases are influenced by only one gene, whereas others are influenced by multiple genes. For some genes, a single variant can dramatically influence your risk of getting a certain disease. The majority of these diseases are rare and the chance that you will get the disease depends on how that variant is inherited. Some examples of rare single-gene diseases include cystic fibrosis and Huntington’s disease. Other diseases are caused by variants in many different genes in your genome. The risk that someone develops type 2 diabetes, for example, is determined by the combination of variants in more than 8 different genes.

Many inherited traits and diseases are more complex, with multiple variants in multiple genes contributing to a disease. Skin pigmentation, eye color, hair color, risk of type 2 diabetes, and many forms of cancer all follow this complex inheritance pattern. These more complex traits do not necessarily follow the typical dominant or recessive inheritance patterns observed in the classic genetic diseases. Instead, the chance that someone has red hair or their risk of developing type 2 diabetes in their lifetime is determined by the combination of variants from many locations in the genome. Complex diseases caused by variants in multiple genes are often strongly influenced by environmental factors. Your risk of developing type 2 diabetes, for example, can only be partially determined by your genetics. What you eat, how much you exercise, and whether or not you smoke also strongly influence whether or not you get type 2 diabetes.
We use cookies placed on your computer for analytics and to improve our website. By clicking Accept or by continuing to use our website, you are giving us permission to use these cookies.